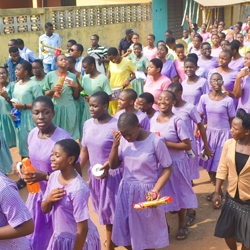 28 MAR, 2018. This year marks the 20th anniversary of Louisville Girls High School, Ijebu-Itele, Ogun State, Nigeria. There are lots of events planned to mark this milestone year, and some events have already taken place.

A few weeks ago, the students of the school marched through the streets of Itele in gratitude to God, and in appreciation of the harmonious relationship that has existed between the school and the local community. This monumental cross-community trek and outreach was led by the Principal, Matilda Adeboye SSL and members of the school management team. The students proceeded through the town amidst singing, jubilation, prayers, congratulatory messages, and orations, dressed in their house colours (which depict the four houses of the school: Bautain - purple, Colmar - green, Louis - pink, and Therese - yellow), and accompanied on all sides by members of staff, like a mother hen hovering over her chicks!

From February 14-17, the 8th biennial inter-house sports competition was another activity organised to mark the 20th anniversary of the school, and featured a variety of ball, field and track events, many of which took place in the new sports complex, which was commissioned in January as part of the  anniversary celebrations. The finals took place on Saturday, February 17, where the battle for medals reached an electrifying pitch!

Congratulations to the school and we look forward to sharing more celebratory events from the school over the course of the year!

To read more about the 20th anniversary celebrations click on Issue 72 and Issue 73 of our monthly newsletter, Musings.