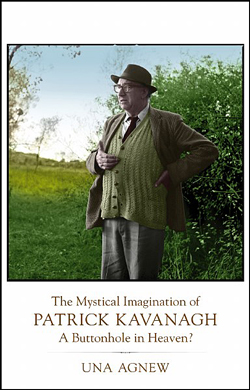 6 MAR, 2019. The revised and expanded 20th anniversary edition of Sr Úna Agnew’s book The Mystical Imagination of Patrick Kavanagh, A Buttonhole in Heaven, was published on February 28, 2019. It can be purchased in Veritas bookstores or on their website.

ABOUT THE BOOK
‘In her study of the turbulent imagination of this turbulent man, Úna Agnew has succeeded in unveiling the still centre. In doing this she has placed us all in her debt.’
-The Irish Times

The poetry of Patrick Kavanagh offers a radical affirmation not only of the human condition, but of the natural world and of God’s presence in both the majestic and mundane facets of daily life. In this illuminating landmark study of the great Monaghan sage, Una Agnew situates Kavanagh’s life and writings squarely in the tradition of Christian mysticism, exploring how his intensely earthy and accessible poems celebrate the presence of the divine ‘in the bits and pieces of everyday’.

By examining Kavanagh’s work with an emphasis on three core themes central to an understanding of mysticism – awakening, purification and illumination – the author makes a compelling case for the inextricable link between the sacred and the commonplace in Kavanagh’s singular worldview. Despite his many personal setbacks, from poverty to rejection to serious illness, Kavanagh, as this study so beautifully illustrates, remained in thrall to the world that surrounded him and, even at his most abject, his mystical imagination remained undimmed.

In the words of poet Mary O’Donnell in the foreword to this new edition of The Mystical Imagination of Patrick Kavanagh, Una Agnew’s ‘penetrating study of [Kavanagh’s] work … brings discussion of this most significant twentieth-century poet to renewed levels of insight.’

ABOUT THE AUTHOR
Sr Úna Agnew is a native of north Co. Louth, close to the birthplace of the poet Patrick Kavanagh. She is a St Louis Sister, and taught for many years at the Milltown Institute, Dublin, Ireland. She studied spirituality at Duquesne University, Pittsburgh, USA and completed her PhD in literature at University College Dublin. She is a founder member of the All Ireland Spiritual Guidance Association and is actively involved in Spiritual Directors in Europe. She has written and lectured widely on spiritual topics. Her research interest focuses on the interface between literature and spirituality.