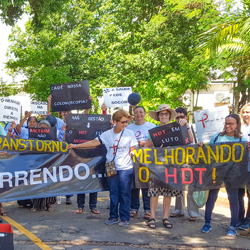 19 DEC, 2019. The AAVE group in Goiânia, Brazil, of which Margaret Hosty SSL is a founding member, commemorated World AIDS Day on December 1, 2019, with various actions, which included a special Mass and a protest outside the Hospital for Tropical Diseases, where lack of medication, broken equipment and shortage of medical personnel are resulting in inadequate healthcare for those who are living with HIV/AIDS.

In partnership with other NGOs, we held a peaceful and silent protest highlighting the various problems at the Hospital for Tropical Diseases (HDT), which includes lack of medication, broken medical equipment (for over 6 months), and shortage of medical personnel, which all result in inadequate healthcare for those who are living with HIV/AIDS, and other infections. During the protest we used a long black banner, which said “HDT está morendo” and translates to “HDT is dying”, and a little black coffin. The hospital has been displaying a yellow and green banner for the past few weeks, which says” HDT is alive and belongs to the people of Goiânia”. We added our own black and white sign adjacent to it, which said “FAKE NEWS”.

To read more, click on the latest edition of Musings, our monthly newsletter - Issue 92.