Sisters flee Civil War in the Tigray Region of Ethiopia 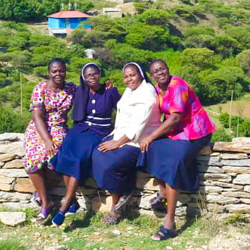 29 MARCH, 2021. Tension between the Tigray Region and the Federal Government of Ethiopia has existed ever since I arrived in 2019. The Tigray people were not happy with Abiy Ahmed, the Prime Minister, and his government. Hence, the Tigray People Liberation Front Party (TPLF) expressed misgivings with the postponement of the October 2020 elections due to the Covid-19 pandemic. They defied the Prime Minister’s Directive and went ahead with the regional elections, in an action that ruined the already volatile relationship between the two parties.

We prayed against the growing tension and I never taught it would result in a devastating civil war. By November 3, 2020, most of the banks in Mekelle and the surrounding towns were closed. There was no internet connection, no electricity, no water and no means of transport. There were police check points all the way from Mekelle to Dawhan. Behold the war had begun to our surprise!

Dawhan became a ghost town as people fled to the mountains for safety; the silence became too heavy to bear. The presence of the military was very frightening. About 1:30am on November 6, 2020, we were awakened by an unbearable noise of gun explosions at a nearby military camp. It felt as if our convent was being pulled down; we were shocked and confused. We began to pray, but could not find words, except to surrender to the Lord, whispering, “Jesus, save us; into your hands, Lord we commend our spirits!”

Later in the morning our parish priest was there to calm our fears. Since that fateful day, the war has continued non-stop. People in the mountains continued to suffer from hunger and thirst; they were left to the mercy of the cold weather. Some sought refuge in South Sudan and in Kenya, but not in Eritrea which was on the side of the government. The only thing that kept us going was prayer.

With a letter from the Administrator of Dawhan, we left our convent on November 16 for Adigrat through the Asimba Mountains, which was unfamiliar and tortuous. It was heartbreaking to part with our neighbour Ababa and her twins, and the children from the Holy Saviour Kindergarten school, as they shouted after us, “Sister! Sister!” We stopped and spoke to them in tears and continued the journey to Adigrat. We were emotionally broken and angry at the leadership of the region who had started this war, without considering the effect on women and children. We arrived at Adigrat on November 16, where the bishop welcomed us with joy. We stayed with the White Fathers until January 10, 2021, when we journeyed to Addis Ababa. I finally arrived back in Ghana on January 20, 2021.

To read more, click on the latest edition of Musings, our monthly newsletter - Issue 106.