Sisters return to war the torn Tigray Region of Ethiopia 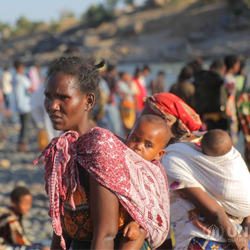 27 MAY, 2021. Late last year, the Tigray regional government in Ethiopia launched a full-scale siege of key Ethiopian military bases, following a breakdown in relations with Prime Minister Abiy Ahmed's federal government. In response, Prime Minister Abiy Ahmed ordered a federal offensive against the region, setting off the conflict, which has killed thousands of people, and is estimated to have internally displaced 200,000 people. The Sisters of Sisters of St Louis were forced to flee their convent in Dawhan last November, returning to Nigeria and Ghana, but thankfully, they were able to return last month. One of the sisters, Perpetua Apo SSL, tells us about how the civilians who have survived, have been affected by the Civil War there.

To read more, click on the latest edition of Musings, our monthly newsletter - Issue 108.